Conclusion: The onset of Stage 1 FGR was picked up only by the integration of colour Doppler studies and will have been missed if only estimated fetal weight was considered.

Detection of FGR is important as these fetuses have poor perinatal outcomes in the short term including perinatal death, fetal distress and neurological injury and long term implications on health during adulthood. [2-7] Early identification and staging of FGR helps customize follow up schedules and appropriate planning regarding the timing and mode of childbirth and subsequent neonatal care. Colour Doppler studies have a very important role in the management of FGR. We will discuss the importance of each of these parameters in this case presentation.

The important details of the two cases are summarized in Table-1.

Table-1: Comparison of important Doppler and clinical parameters of the two cases in the 3rd  trimester

This Case presentation aims to highlight several learning points and to discuss the importance integrating colour Doppler Studies with routine 3rd trimester ultrasound exams . The non integration of colour Doppler studies and reliance only on fetal biometry and estimated fetal weight will have led us to miss the diagnosis of Stage 1 FGR. This will have limited the opportunity to closely monitor progress and potential deterioration in this case.

Late-onset FGR represents the majority (70-80%) of FGR and has a low association with PE. Placental disease may be minimal or mild and the umbilical artery (UA) Doppler may be normal in almost all cases.[8]. However, these cases may show a high association with abnormal Cerebro-placental (CPR) values and Middle Cerebral Artery (MCA) PI<5, which suggests advanced brain vasodilation suggesting chronic hypoxia, may occur in 25% of late FGR [8]. Although advanced signs of fetal deterioration with changes in the DV are usually not visible in late onset FGR, there remains the possibility of acute fetal decline, fetal distress and neonatal acidosis.[9] Late FGR may be unpredictable in its course and can cause severe injury or death without observable late-stage signs as in early FGR possibly explained by a very low tolerance of term fetuses to hypoxia, the more frequent presence of uterine contractions at term, and even rapid placental function failure.[9]

Traditionally, the umbilical artery (UA) Doppler studies have been relied on to consider a diagnosis of FGR. Meta analysis have provided evidence that UA Doppler can improve mortality rates and perinatal outcomes in FGR. [10] However, UA fails to identify mild placental disease that make up the majority of early-onset cases and almost all late-onset FGR.  Additionally, SGA, considered to have a  normal UA pulsatility index (PI), includes a significantly large proportion of fetuses with worse perinatal outcomes than normally grown fetuses. UA Doppler provides both diagnostic and prognostic information. The progression of UA Doppler patterns to absent or reverse end-diastolic flow correlates with the risks of injury or death. UA Doppler in high-risk pregnancies improves perinatal outcomes, with a 29% reduction (2-48%) in perinatal deaths [10]. Absent or reversed end-diastolic velocities maybe found on average 1 week before the acute deterioration and may be found in nearly 40% of fetuses with acidosis.[11]

MCA provides information about vasodilation in the brain, which is a surrogate marker of hypoxia. MCA PI <5th centile is associated with adverse perinatal and neurological outcome and is useful for the identification [8] and prediction [12,13] of adverse outcome among late-onset FGR, independent of UA Doppler. The risk for emergency caesarean section for fetal distress is six times higher in fetuses with abnormal MCA PI compared with SGA fetuses.  Late FGRs with abnormal MCA PI are also at higher risk for poorer neurobehavioral competence at birth and at 2 years of age [12,14].

The CPR is a diagnostic index that improves the sensitivity of UA and MCA  as increased placental impedance (UA) is often combined with reduced cerebral resistance (MCA). The CPR may already be decreased when the UA or MCA show mild changes that are still within normal ranges [15,16]. Abnormal CPR is present in about 25% of late SGA fetuses before delivery and is associated with a higher risk of adverse outcome at induction. An abnormal CPR predicts neurobehavioral problems at 18 months of age [17]. The anterior cerebral artery-CPR rather than the MCA-CPR shows a stronger association, indicating a differential impact of regional alterations in cerebral blood flow impedance on development that is consistent with findings in early FGR [18,19].

DV is a strong predictor of the short-term risk of fetal death in early-onset FGR. DV flow waveforms become abnormal only in advanced stages of fetal compromise [20] and there is a good correlation of abnormal DV waveform with late-stage acidemia [21]. Absent or reversed velocities  are associated with perinatal mortality independent of GA at delivery [22], with a risk ranging from 40 to 100% in early-onset FGR [23]. An abnormal DV is an indication to recommend delivery at any GA after completion of steroids. A DV above the 95% centile is associated with higher risks but not as consistently as when atrial flow is reverse. Abnormal DV precedes the loss of short-term variability (STV) in computerized cardiotocography (cCTG) in a about 50% of cases and is abnormal 48-72 h before the biophysical profile (BPP) in about 90% of cases [20]. Thus, abnormal DV provides a better indication for delivering fetuses in critical conditions at very early gestational ages.

There is no evidence to support the use of traditional fetal heart rate (FHR) monitoring or ‘non-stress tests’ in FGR fetuses and false positive rates are very high. A main limitation of conventional CTG is the subjective interpretation of the FHR. cCTG evaluates STV of the FHR, an aspect that subjective evaluation cannot assess and is sensitive to detect advanced fetal deterioration providing a value similar to DV reverse atrial flow for the short-term prediction of fetal death. Biophysical Profile(BPP) is calculated by combining ultrasound assessment of fetal tone, respiratory and body movements, with amniotic fluid index and a conventional CTG. However, a high false-positive rate (50%) limits the clinical usefulness of the BPP [25]. A meta-analysis [26] showed no significant benefit of BPP in high-risk pregnancies. Consequently, whenever Doppler expertise and/or cCTG are available, the incorporation of BPP in management protocols of FGR is questionable.

Currently, the best test to differentiate FGR from SGA is the Doppler cerebroplacental ratio (CPR). CPR reflects even mild increases in placental resistance with mild reductions in fetal brain vascular resistance and correlates better with adverse outcome [14]. The uterine artery Doppler PI (UtA PI) can be abnormal even if UA Doppler is normal and predicts a poorer outcome in small fetuses. A very small EFW <3rd percentile is another predictor of poor outcome. Fetuses with an EFW <3rd percentile  have a much higher risk of adverse perinatal outcome irrespective of the CPR and UtA Doppler indices [27]. The risk of adverse perinatal outcomes is increased when any one of CPR, UtA PI or EFW <3rd percentile is abnormal. A recent study reported that the risk of caesarean section for fetal distress or neonatal acidosis was 8% in controls, 11% when all three parameters  CPR, UtA PI or EFW <p3 were normal and 36% when any one if these was abnormal [28]. 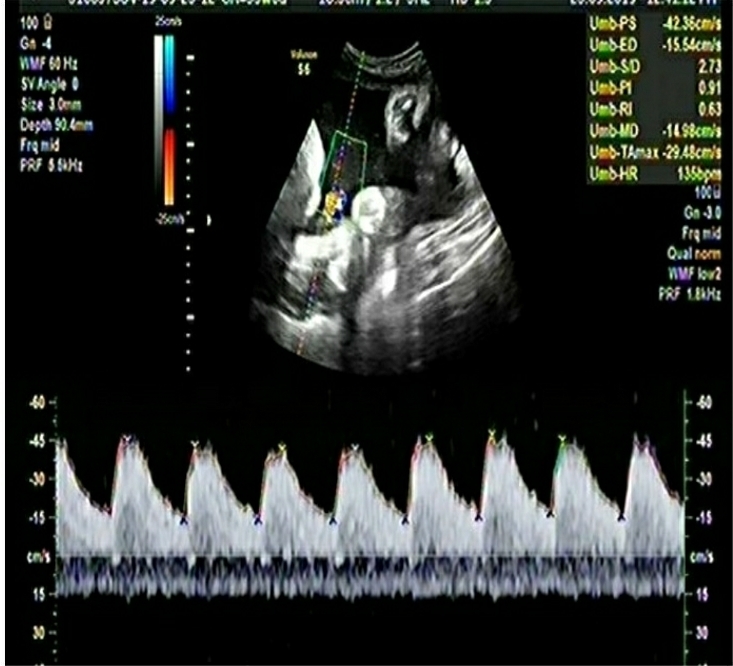 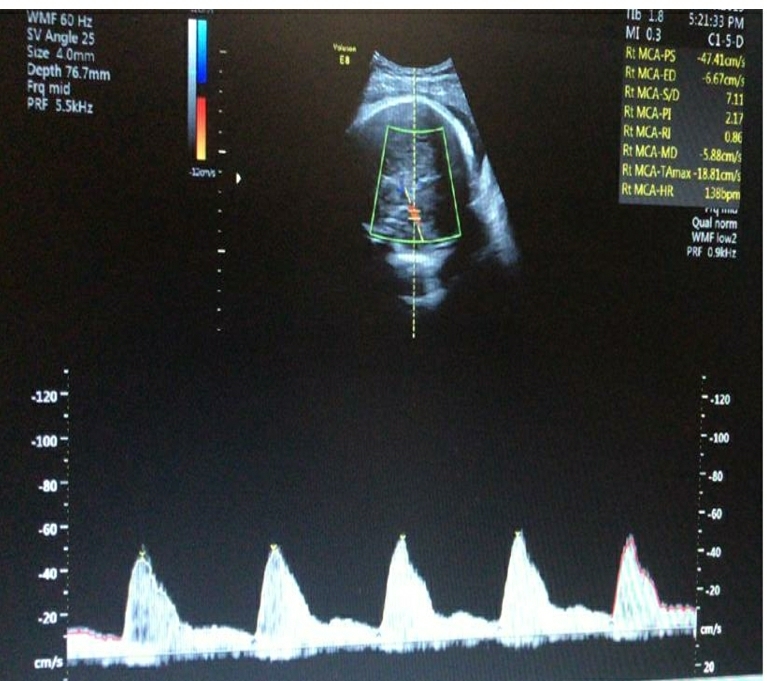