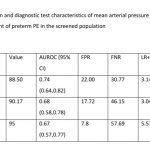 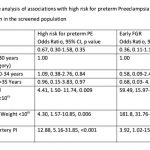 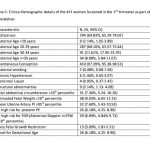 Aim: To describe the incidence and associations of early fetal growth restriction and high risk for preterm PE in pregnant women screened using the 2nd trimester protocol of Samrakshan, India

Conclusion: Incorporating Doppler studies of the uterine artery in the 2nd trimester screening protocol led to a significant decrease of fetuses identified as early FGR and change in risk categorization of fetuses.

Each woman screened as part of Samrakshan was assigned a unique identification number (ID) at the first screening visit, which is carried throughout the course of pregnancy. The unique ID helps to link records with previous visits. In the 2nd trimester, clinico-demographic details including age of the woman, parity, type of conception, maternal smoking, previous risk of preeclampsia, date of previous delivery and prior birth (if applicable), use of low dose aspirin, and medical co-morbidity were collected. The systolic and diastolic blood pressure of both arms were measured twice in the sitting position and a mean arterial pressure (MAP) was determined for each woman.[4] A Targeted Imaging for Fetal Anomalies (TIFFA) scan was done between 19 and 22 weeks to identify structural abnormalities. Placental thickness was assessed as the vertical length measurement of placenta excluding retroplacental myometrium. The volume of liquor was determined based on the single deepest vertical pocket and a single deepest vertical pocket between 2-8 cm was considered as normal. [5,6] The estimated fetal weight (EFW) of each fetus was calculated from the head circumference (HC), abdominal circumference (AC) and the femoral diaphyseal length (FL) using the Hadlock III formula. The fetal AC and EFW of each fetus was categorized as <3rd, 3-10th and >10th percentiles.[7]

The uterine artery Doppler study was performed through a transabdominal approach. Pulsed‐wave Doppler was used to obtain the spectral waveforms after identifying the right and left uterine arteries at the cross over with the external iliac arteries and the Pulsatility Index (PI) was measured when at least three similar consecutive waveforms were obtained. A mean uterine artery Doppler PI >95th percentile was considered as an abnormal study.[8]

Data was entered online and stored in de-identified form in a password protected database in Samrakshan. Point estimates and 95% confidence intervals around point estimates were determined using the Open Epi program. A binomial test was used to determine significant differences in proportions and a pairwise correlation test was used to determine correlation of fetal AC and EFW. Potential differences in MAP and placental thickness by risk for development of preterm PE and early FGR was assessed using a student’s t-test.  The 75th, 80th and 90th percentiles of MAP were determined and the area under receiver operator characteristic curve (AUROC) was determine determined for these measures of MAP with the risk of development of preterm PE. The diagnostic accuracy, false positive rate (FPR), false negative rate (FNR) and positive likelihood ratios were determined for the 75th, 80th and 90th percentile of MAP with the risk for development of preterm PE.  A bivariate analysis was used to explore potential associations with early FGR and risks for development of preterm PE and expressed as odds ratios and 95% confidence intervals.  A p value less than 0.05 was considered as statistically significant. 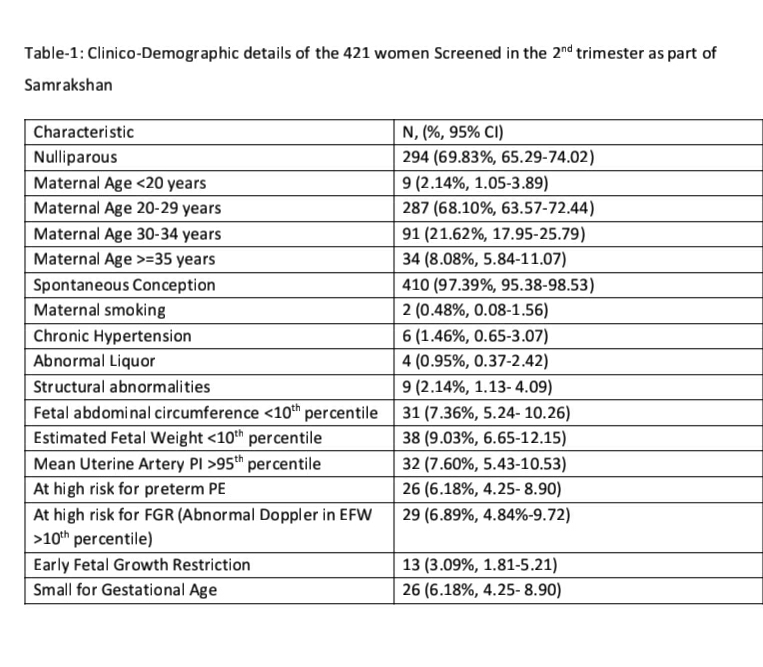 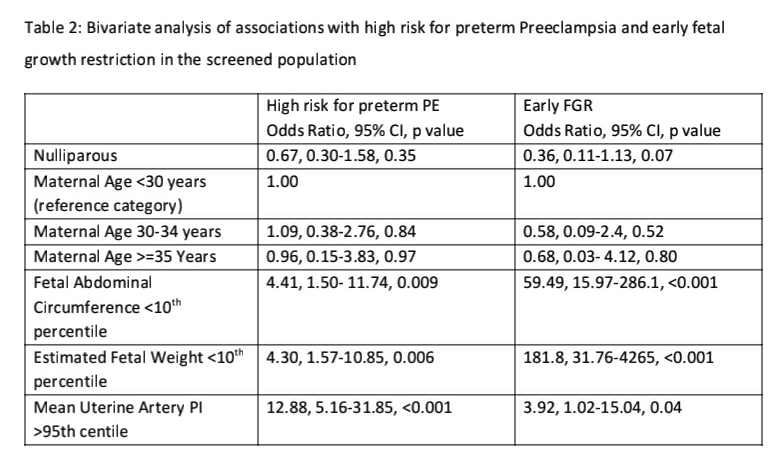 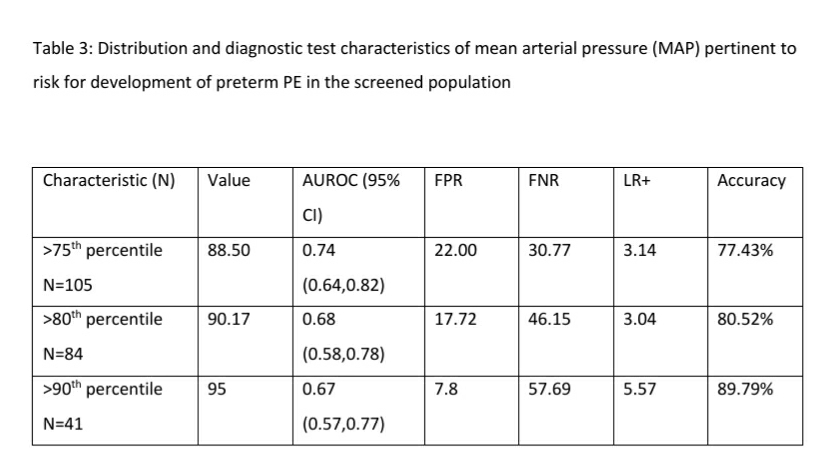 A previous study reported that a second‐trimester model using uterine artery PI, maternal factors (including BMI, ethnic origin, previous obstetric history, smoking status, type of conception, medical history) and mean arterial blood pressure can detect as many as 100% of women who develop early PE for a false‐positive rate of 10%. [12] The sensitivity for late PE and gestational hypertension was 56.4% and 54.1%, respectively. [12] The integration of mean uterine artery Doppler PI and the Bayesian risk algorithm identified 6.18% of the 2nd trimester population screened in Samrakshan as at high risk for the development of preterm PE. These estimates of possible incidence are consistent with the known estimates of pre-eclampsia in India (5-8%). The population is being followed up to determine the diagnostic effectiveness of the 2nd trimester protocol aligned with perinatal outcomes. Parity, maternal age, maternal co-morbidity, prior obstetric history, were positive for only 2.37% of the screened population indicating their inadequacy, in isolation, to identify those at risk for preterm PE.

The results of this study suggest that MAP >90th percentile may indicate a higher risk for the development of preterm PE. The MAP >95th percentile gives a higher LR+ and diagnostic accuracy but comes with a much higher false negative rate. Considering the clinical implications of preterm PE, the MAP >90th percentile gives a better balance between LR+ rates, FPR, FNR and diagnostic accuracy. However, we recommend caution while interpreting this result and do not recommend clinical translation at this stage. A larger study with a larger sample size from diverse settings is needed to determine the percentile distribution of MAP. Additionally, the current analysis presents the diagnostic test characteristics of MAP pertinent to the risk of development of preterm PE. We need to further analyse the percentile distribution of MAP with the actual development of preterm PE to obtain more meaningful results that can translate to clinical application.

Fetal AC and EFW showed a good correlation indicating that AC could be used instead of EFW in the diagnosis of FGR. The integration of Doppler in the diagnostic parameters led to a significant reduction in the incidence of fetuses classified as early FGR (from 9.03% to 3.09%). The integration of Doppler also led to a significant reclassification of fetuses at risk. Twenty-six (6.18%, 95% CI: 4.25, 8.90) fetuses with an EFW <10th percentile (would have previously been classified as FGR) had a normal mean uterine artery PI and were now classified as SGA fetuses with a risk of perinatal outcomes similar to AGA fetuses. Twenty-nine fetuses (6.89%, 4.84%-9.72) with an EFW >10th percentile (AGA fetuses) had a mean uterine artery PI >95th percentile and were now classified as at higher risk for the development of fetal growth restriction.

However, the integration of Doppler results in a shift of a group of fetuses earlier considered as high risk to a lower risk category (SGA) and shifts a group of AGA fetuses previously considered as low risk to a higher risk group. The shift of risk categorization in AGA fetuses is important as they are less closely monitored due to their low risk status. Additionally, the integration of colour Doppler studies helped to differentiate 23% of fetuses with early FGR as having a possible uteroplacental causation. The real implications of this reclassification, however, has to be assessed in terms of perinatal outcomes and the screened population is being followed up to obtain those results.

Our findings suggest that reliance on growth alone or changes in growth alone to identify fetal growth restriction may not be optimal. This finding assumes greater importance when we consider the inherent inaccuracies and variations associated with the ultrasound estimation of growth parameters and their plotting on growth charts. This is an area that needs further study.

The number of fetuses identified as needing closer surveillance due to early FGR and a risk of development of preterm PE and early FGR was significantly higher (p<0.001) than the number of fetuses identified with structural abnormalities (n=9) in the screened population. This finding has implications on the current focus of 2nd trimester screening that is heavily oriented towards the identification of fetal abnormalities.

The National Family Health Survey (NFHS)-4 reported a perinatal mortality rate of 36 per 1000 pregnancies in India.[13] The NFHS-4 reported a neonatal mortality rate of 30 per 1000 live births and a still birth rate of 0.7. [13] Prematurity and low birth weight were identified as the major causes for neonatal mortality in India. [14] Second‐trimester prediction of PE is at least as sensitive as prediction in the first trimester, but has limited value due to the lack of effective interventions that can be offered at this gestational stage.[12, 15] Low dose aspirin started in the first trimester of pregnancy (11-14weeks) appears to reduce the development of PE but is ineffective when started after 20 weeks. [16,17] Although it is too late to prevent the development of PE after second‐trimester prediction, the knowledge can still be useful in guiding follow‐up and management of a pregnancy at risk. [18,19]

The preliminary results of the 2nd trimester screening protocol of Samrakshan indicates that integrating Doppler in the routine 2nd trimester exam may help better with identification of subgroups that need closer surveillance. However, these results have to be validated through further longitudinal studies on larger sample sizes from diverse settings and aligned with perinatal outcomes. 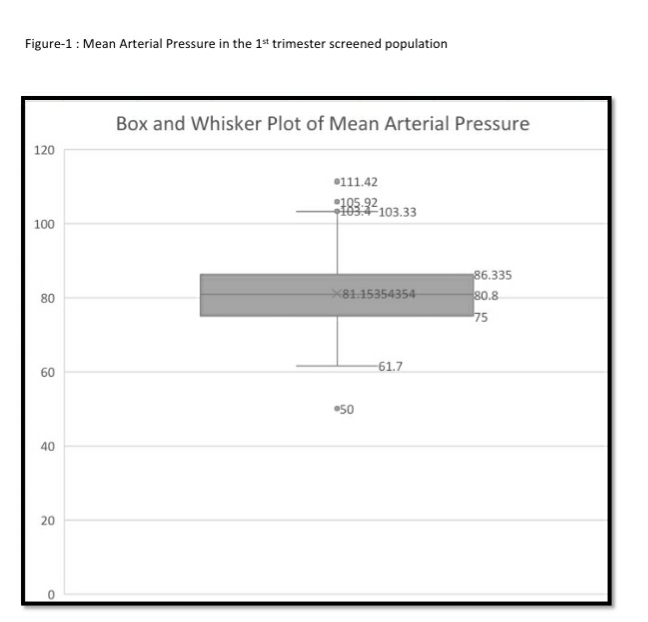